Sherlock and the Case of the Stolen Skateboard: True Story, with Help from the Baker Street Irregulars

It was during a pleasantly brisk evening in September of 2010 that I returned home from a long day of classes. I was in a good mood and hummed a tune as I walked toward my house, while my block basked in the dark tones of the setting sun. I had no idea of the drama that awaited me as I unlocked my front door. As I made my way up the stairs, I was told that my daughter had left one of my skateboards in the front yard of her friend's house and that it was missing when she returned. Needless to say, my mood quickly changed to anger. I stopped to assess the situation: my neighbours have CCTV and the culprit may very likely have been caught in the act. I went with my girl to said neighbour's home in order to view the video footage. We were joined by three children between the ages of six and thirteen. I was only allowed to watch the footage once, thus I committed all the details of the suspect's (and the two who accompanied him) physical features, height, body language, and clothing to memory. That proved  to work out well since I was denied a request to watch the footage a second time. The reason for the denial was given as, "the thief is a gang member, therefore we are afraid of negative consequences if you confront him." The adults were frightened that any investigation on my part would result in the escalation of gang activity in the neighbourhood, possibly placing innocent people as targets of retaliation crimes.

The assumption that the thief was a gang member was echoed by many of the adults on my block when I asked for any assistance from them. I deduced that he was NOT a gang member. When I tried to reason with the adults they persisted in their irrational and unfounded fear of gang violence being stirred on by my investigation of the case. They let feelings obscure their judgement of the situation. Some begged me to stop and simply "drop it." No adult, not even my skateboarding neighbour on the next block, would help me in any way; he just said, "oh well, your skateboard is gone and you'll never find it again."

Why was I so sure this wasn't gang related activity? Well, this is what I noticed on the film footage. First off, he had a Justin Bieber hair-do. No gang members in Chicago would have hair longer than a crew-cut. The most common hair for gangs would be either fully shaved or extremely short. Secondly, he did not dress as a gang member. His pants actually fit, unlike the saggy pants usually found in gangs. Thirdly, his body language and mannerisms did not fit with those displayed by gangs (for example, the characteristic gang limp was lacking, he didn't have the mannerism of someone who feels they "own" the neighbourhood; the air of superiority was missing). His body language betrayed that he was an opportunistic thief, meaning that he stole because he saw a chance to steal. His height was easily measured in relation to the gates in front of the house. The fact that his two companions were of about the same height and age (teenagers) coupled with the fact that the crime took place right after school let out (around 3pm) told me that they were students at a local high school. Judging from the direction they were walking, (west to east) I surmised that they were students from the only high school which was within walking distance in that direction.


The police didn't help any either. They stated that since the skateboard was valued below $300, it wasn't worth their time to investigate it. Again, the adults were of absolutely no help. Dead end.

The next day I had printed out fliers with a picture of my skateboard describing the suspect and stating the the timeframe of the crime. I handed out one of these fliers to my local skateboard shop, knowing that this would be the most likely place the suspect would go to get work on the deck done. They know me and my boards there, if someone popped up w/ my deck, they would notice.

I made a trip to the high school and met with the principle of that school. I described the suspect and asked if he knew someone of that description. He said no. He also told me students don't bring skateboards to the school because skateboards are not allowed on school grounds. I left him my flier but I knew that this was another dead end.

I had reason to believe that the criminal would return to the scene of the crime. If they were students of the nearest high school, I expected that at least one of the three individuals caught on film live in the vicinity, therefore, one of them would pass by that same location in the near future. I spoke to all the kids in the area to help me out. They had a different mindset than the frightened and indifferent adults: the kids saw this as an adventure, a crime mystery which they wanted to help solve. I gathered the eager kids around and told them the plan: some would pretend to be playing on the sidewalk, others would stake out corners and nooks between buildings. The kids had a secret password which was their cue between themselves that they spotted someone. Any characters who fit the description were to be carefully observed and I was to be updated via text on any developments. I made it clear that once any of these characters were spotted I was to be the person confronting them. Keeping in mind the fact that most skateboarders are male, statistically speaking, the suspect would assume that he stole the board from a male. That is why I set the female kids out in plain view. Not only do people overlook children, but people overlook the fact that there are female skateboarders as well. The suspect would (wrongfully) assume that he stole the deck from a male and would therefore keep a watchful lookout for males.

The kids were indispensable and could "go everywhere, see everything, overhear everyone" (as Sherlock Holmes said about the Baker Street Irregulars in The Sign of Four). And, same as Sherlock, "I expected to hear before evening that they had spotted" him."In the meanwhile, all I can do is await results." As Cumberbatch's Sherlock puts it: "my eyes and ears all over the city" (BBC's Sherlock in The Great Game). My Irregulars aren't all over the city, but they are where they're needed!

I got a text from the eldest kid telling me that one of the companions of the suspect showed up. When I left the house to confront him, the eldest kid told me that she had already confronted him and that he was on his way to the house where the suspect had stached the skateboard for safe-keeping. He had promised to return with the deck in 20 minutes! It wasn't ideal that the eldest hadn't waited for me to do the confronting, afterall, as the adult and it being my skateboard, I didn't want to have the kids in any potentially difficult situation. As it turned out, everything went well and I had my skateboard in my hands within 24 hours of it being stolen!

After the companion returned with the skateboard, he told me that he had spoken with the suspect and that that he, the suspect, had agreed to come to apologize for the theft. During the course of this conversation, I noticed the body language of my neighbours who had earlier expressed their trepidations and were now standing across the street with worried looks on their faces. One of my neighbours had taken me to the side as I stepped outside of the house and started walking toward the companion, and tried to convince me to "not cause any waves" due to concern over the gangs. I reassured them that this was not an issue of concern.

Less than an hour later, the suspect approached me and apologized. During this time he varified that he was a student at the high school I had visited. I had a stern word with him and did my part to set him on a better path.


A huge thank you to my Baker Street Irregulars! You know who you are and I am eternally grateful!

I am currently reading Mastermind: How to Think Like Sherlock Holmes by Marina Konnikova (contributor to Scientific American (magazine) and Scientific American Mind (magazine). Her book describes how to utilize creativity and the scientific method in order to improve memory and deductive/inductive reasoning skills. While reading her book I was inspired to post this story.

For the record, my favourite Sherlocks are Benedict Cumberbatch, Vasili Livanov (Russian, also played Gena in Cheburashka), and Jeremy Brett. 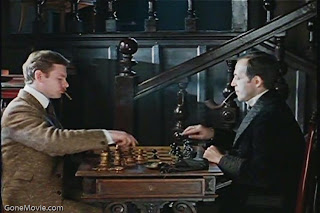 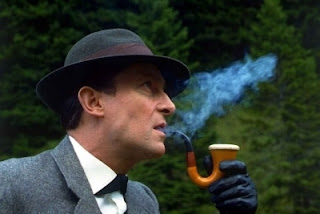 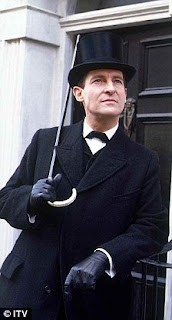 
~~~~~~~~~~~~~~~~~~~~~~~~~~~~~~~~~~~~~~~~~~~~~~~~~~
STRANGE INTERLUDE: My Vaudeville, Time-Travel inspired band, "Hypnagogic Telegram" is going VIRAL on Youtube. I play a literal personification of a Time Ghost (Zeitgeist) that inhabits the wardrobe closet of the TARDIS. I come out in costumes from various eras to dance & sing in styles from those eras. Film in background is Georges Milies' Trip to the Moon (1902) silent classic. If Doctor Who would have a band, it might sound like this. 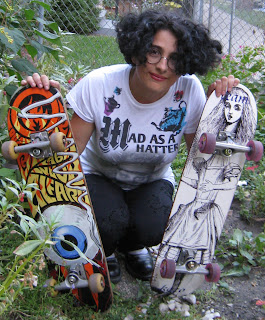 Posted by SexlogistD at 6:52 PM