Albert Robida; Grandfather of Science Fiction Illustration
Born in 1848, Albert Robida, a French illustrator, etcher, lithographer, caricaturist, and early science fiction author, contemporary of Jules Verne, envisioned a world which was interconnected via an astonishingly prophetic device called a Téléphonoscope. It has a small phonographesque speaker/microphone and is oval in most illustrations, rectangular in the Sahara Battle image. It transmits live performances and news broadcasts from around the world, brings the classroom to the student (distance learning), connects with loved ones live (Skype), and distance voyeurism. He is best known for his trilogy of futuristic novels; in the first book, Le Vingtième Siècle (The Twentieth Century, 1883), his readers were introduced to the Téléphonoscope.

The sequels of Le Vingtième Siècle, are Guerre au Vingtième Siècle (War in the Twentieth Century, 1887), and La Vie Électronique (Electronic Life, 1890). All three of these books he illustrated himself. He stands apart from Verne because Robida imagined how everyday life would be with inventions of the future, whereas Verne wrote mainly about mad scientists and their inventions. 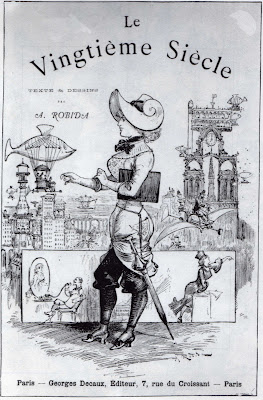 The Twentieth Century (: Wesleyan University Press, 2004) is illustrated in a classically beautiful pen and ink style, common in the 1800s. Robida expertly  cross-hatches and shades with an eye for perspective and proportion which compensates for the lack of colour. The English cover presents a rotating house on top of a framework metal structure. The book transports us to in 1952: dirigibles, flying taxis, and personal aircraft fill the sky. The dirigibles resemble flying fish, creating a dream-like quality to the scene.
The French cover (p VIII in English edition) portrays characters and events from the book. One of the main characters in the book, Hélène, is seen dressed as a lawyer on the lower right-hand side. Above her, we see Notre Dame with a restaurant and dirigible depot attached. On the lower left side, we have two people conversing on what Robida called a Téléphonoscope, what we call the internet today. The central figure is that of a Femme Moderne, she is an emancipated woman of the new century. Her dress is short, revealing her pants and tights underneath, yet much of her wardrobe still has very classic Victorian elements to it (corseted waist, elegant top hat, long umbrella, lace and bowtie decorations, long gloves, etc). Robida elegantly portrays the flowing of fabric with a keen eye for individual style of dress for each character. She, in combination with the two figures at her feet, comprises a triangular composition, similar to paintings from the Renaissance.

Robida’s art is highly stylized: curves, ovals and hour-glass shaped women populate his illustrations. His female characters are realistically rendered whereas many of the males look like caricatures; rounded noses, eccentric mustaches and beards.


Robida was a product of his time, and envisioned the future through the eyes of a man of his era. Although his art portrays the future, it is still highly stylized in the Victorian taste. There are many elegant curves and intricate ironwork that are reminiscent of the design used on the , which was completed in 1889. The fashion design is a variation on a Victorian theme. These illustrations were produced when was well into the Industrial Age and demonstrate the possible the progression of Industrialization. Although his interpretation of the future in this book appears optimistic, his next book, La Guerre au Vingtième Siècle (War in the Twentieth Century), portrays the future of war, with new weapons of destruction: airship weapons, submarine warfare, tanks, and women soldiers.


﻿﻿
Paris presents us with a saturation of advertisements: billboards, signs, and dirigibles flood our view selling everything from clothes and banks to apartments and newspapers. This is comparable to Piccadilly Circus or Times Square today. Although Trilingual Theater represents a live performance of one play shown simultaneously on three levels, each in a differnet language, it conjures up modern-day DVD technology, where the language changes at a touch of a button.
Robida’s illustrations depict few nature scenes and are primarily of urban settings and the individuals who live there, although, some of his panoramic views of the urban landscape show plumes of smoke and soot coming from the stalks of factories and chimneys (Robida, p. 69). He was well aware of the polluting aspect of Industrialization. Paris by Night stands out amoung his illustrations as one of a handful of watercolours in this book. It depicts a couple in a private flying machine crusing over the city on a lovely night. They share the sky with larger dirigibles shining headlights evocative of fisheyes. 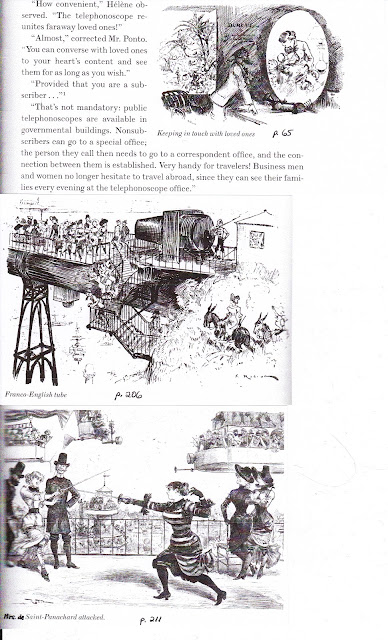 Franco-English Tube is Robida's concept for our current Chunnel. Mrs. de Saint-Panachard attacked has two women dueling. Both illustrations use diagonal lines to create a dramatic effect. Robida's female characters are emancipated: many are lawyers, doctors, and politicians.
Robida is the father of science fiction illustration, having inspired science fiction artists and writers who followed him. Many of his visions of the future came to pass.﻿﻿ His books and art are well known in France and have influenced many comic book (Bande-desinee) writers and artists such as Herge's Professor Calculus from Tintin from Belgium and, more recently, Brian Talbot's Grandville graphic novel from England. Robida's vision is amazing and unforgettable.
~~~~~~~~~~~~~~~~~~~~~~~~~~~~~~~~~~~~~~~~~~~~~~~~~~~~~~~~~~~~~~~~~~~~~~~~
ALBER ROBIDA NEWS: HYPNAGOGIC TELEGRAM, my band, performed a CHAPLIN dance in ROBERT ROBIDA dress w/ 1902 George Melies film Trip to the Moon aka Voyage dans la Lune as backdrop (as seen in Johnny Depp produced Hugo film). More costume time travel Doctor Who inspired vaudeville songs to be posted. Youtube channel DAINASURREALISM
Posted by SexlogistD at 9:35 PM