An Artist's Perspective
I am currently working on my Elegance of Masculine Beauty project; photographing and illustrating elegant masculine figures; paying minute attention to details of male bone structure, muscle tone, and angular aspects of the face. I have concentrated on figure drawing since I was a child and attended art schools in both Germany (Berlin University of the Arts) and the United States (Columbia College, Chicago), pursuing a degree in Fashion Design while continuing to work with artist models in order to fine-tune my rendering skills. My speciality is costuming, particulary period and character costumes. I am a member of the Chicago Surrealist Group and incorporate the human figure into my surrealist art. Check out my blog on How to Remember your Dreams & Tap into Creativity

I am concurrently completing my second degree, which is in Women and Gender Studies at University of Illinois at Chicago. I plan to go on to grad school with a special concentration on gender dynamics (such as psychological and anthropological aspects of male, female, and gender non-conformist behaviour, communication, and societal perceptions, especially in pair-bond relationships). Sherlock fans would enjoy my other blog the Science of Sexuality in "Sherlock," Missed Clues on Irene Adler, and a Pheneylethylamine Float

In my studies of the masculine physique, I couldn't help but notice that Benedict Cumberbatch and Ryan Matthew Cohn look similar from certain angles. Cohn is affiliated with "Obscura," a Fortean curiosities shop in New York City which specializes in medical anomalies. Cohn and Cumberbatch aren't identical, but both have similar facial proportions and structures; smooth, square hairline: a straight, narrow nose: slim face tapering off at the chin: tall, slim build and lean muscle tone. 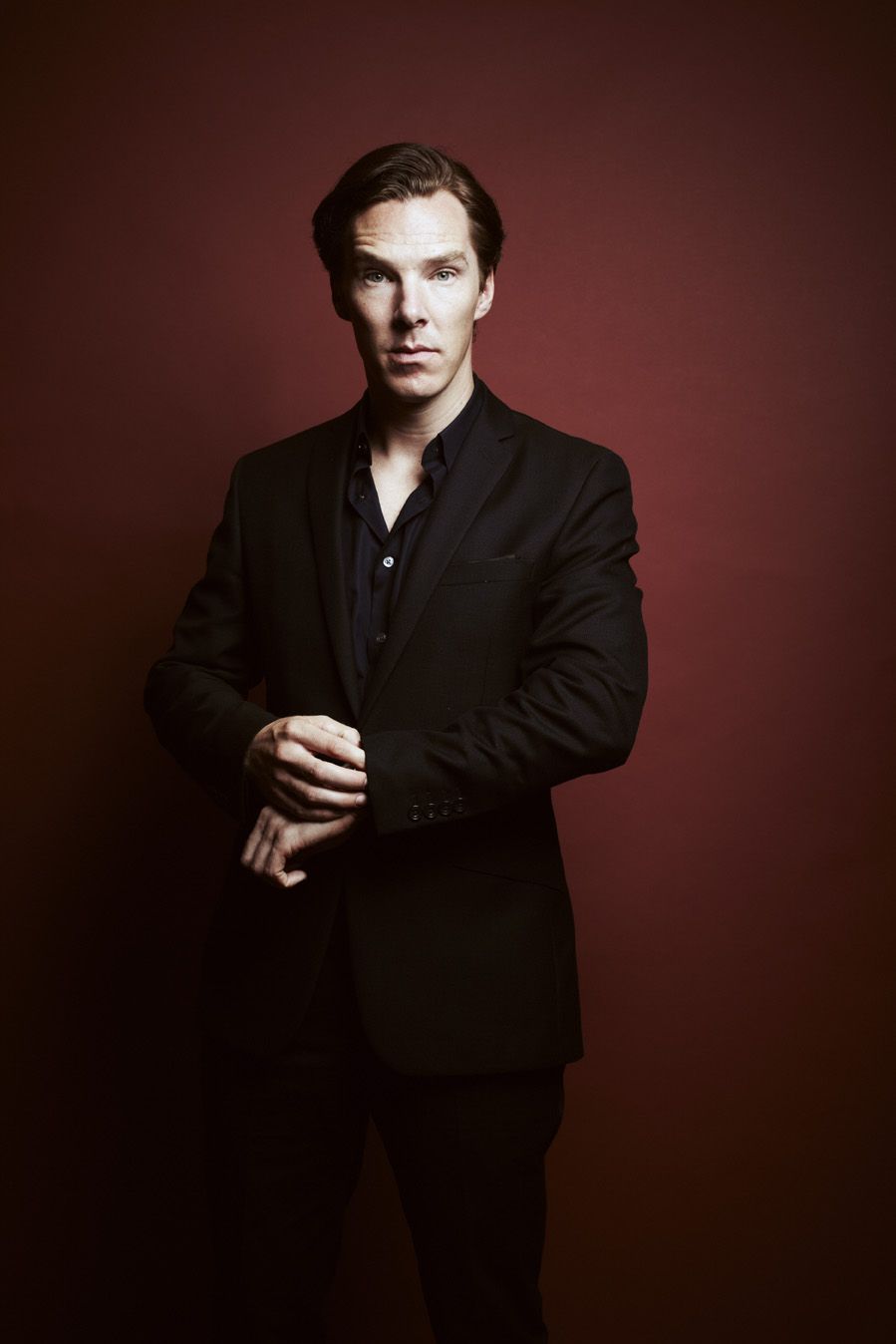 The lighting creates similar shading patterns. The most obvious difference between the two of them is the eyes. Cumberbatch's eyes are shaped like parallelograms, whereas Cohn's are more elliptical. Likewise, Cumberbatch's eyebrows have a sharper angle toward the sides, and Cohn's are straighter. Both have similar curvature of the jawline. Cunberbatch's shoulders slop at slightly more of an angle than Cohn's, but that may also be due to the padding in the jackets.

The hair looks similar, but looks can be deceiving. The natural hair colour of Cumberbatch is a ginger/light auburn, although a lighter auburn than Diana Rigg's hair in "The Avengers" (1965 - 1968). His hair is also curlier than that of Cohn's. Lighter hair colour creates the appearance of smoothing out facial features (i.e. make them seem less angular), lighter hair also makes a man look a tad bit younger.

Frontal pose (head tilted down at a side angle) 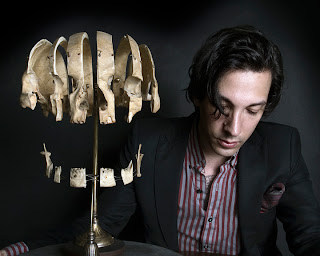 Cohn and Cumberbatch are both rather stylish men whose elegance make them well suited to be artist models. Their poses have a classic charm and do a good job of capturing masculine elegance. Although I am not normally a fan of men in suits (my designs for men are more diverse), I do appreciate a well tailored suit on someone who wears it well.

I find it appropriate that Cohn's work is on articulating human (and other specie's) skulls, since much of my artwork focuses on studying the human figure (skeletal, musculature, movement, and function). I don't have a real human skull in my collection of surrealist oddities, but I do have a few bird skulls. I utilize a life size replica of the human skull as well as a life size anatomical head with musculature. These items are invaluable for a figure drawing artist. Not exactly the same angle, but it is visible that the general outline of the the head is very similar: neither of them has a prominent brow ridge, thus smoothing out the forehead: shape of their zygomatic arch (i.e. cheekbone) are close in form and position. Cohn's nose is more angular and his facial muscles are relaxed. Cumberbatch is slightly tensing his brow and eyes. The fact that the light source is coming from a slightly different direction in each photo creates a varied play on shadow.

Cohn and Cumberbatch make great artist models. This has only been a general comparison. There are more  differences than the ones I mentioned. I find this will assist me in my further studies of male facial features and angles, as well as work on light and shadow. These kind of camparative studies help to fine-tune spotting the minute differences which make each face unique. 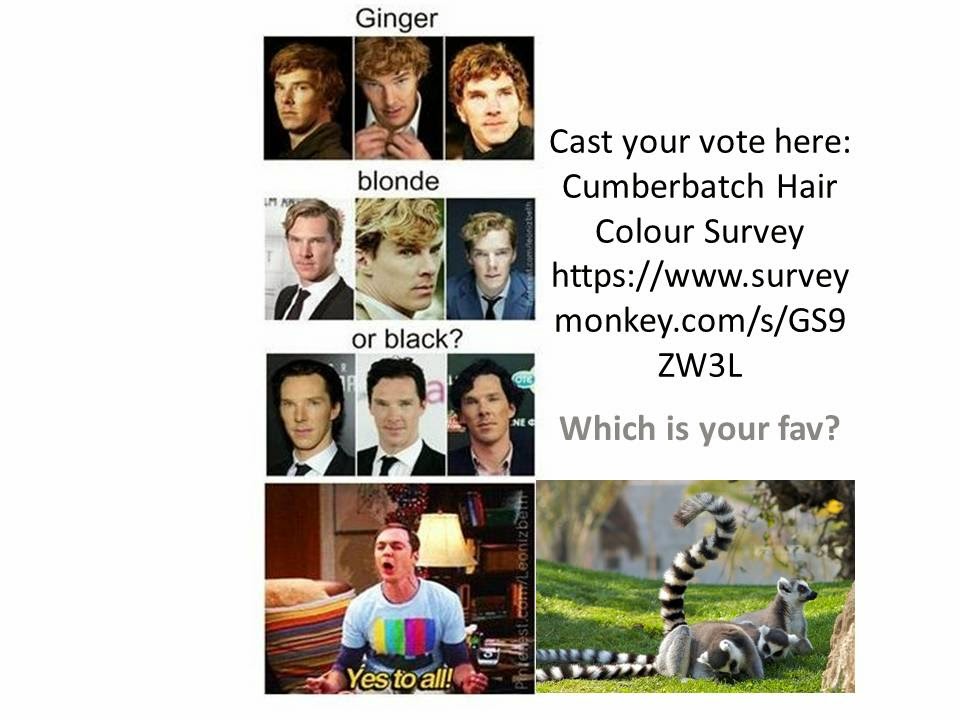 Please vote for fav Cumberhair on my survey. 100% anonymous. You can view statistics after your done!
Create your free online surveys with SurveyMonkey , the world's leading questionnaire tool.
To view my art, check out
my illuminated dream manuscript, 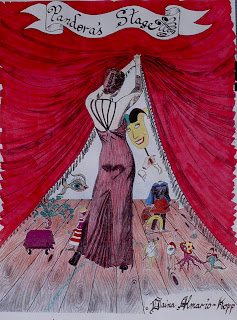 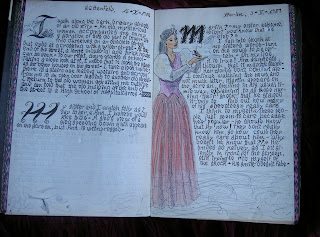 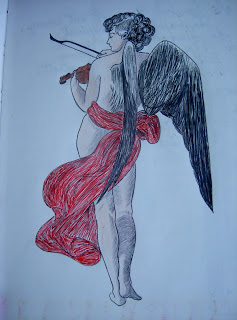 elegant surrealist art,
experimental surrealist self portraits
and fashion design and period/character costuming
Posted by SexlogistD at 1:50 AM