Animaniacs is a Warner Brothers animated series which ran for five seasons from 1993 – 1998. MAJOR NEWS: Classic episodes of Animaniacs is now being shown on The Hub Mon - Thurs 7pm EST, 4pm PST! Executive producer Steven Spielberg and senior producer/writer Tom Ruegger present us with a mad-cap comedy in classic Looney Toons style with running gags, visual puns, side-splitting lyrics, spoofs of films and TV shows, and parodies of celebrities, politicians, and historical figures. Homages to classic films and cameos of celebrities, especially from the Golden Age of Hollywood, are to be found around every bend. The main characters are the Warner brothers, Yakko and Wakko, and their sister, Dot. They have cat-like tails, black fur; wear white gloves, have white feet and white faces. One of the recurrent gags is that none of the other characters can figure out what species they are. They in turn revel at keeping everyone guessing. 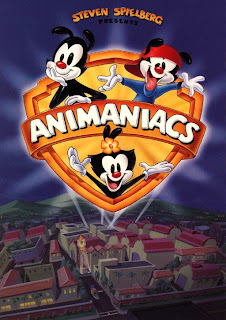 The first episode opens with the back-story in black & white with Yakko’s, Wakko’s and Dot’s red noses being the only colour in the sequence. It starts with a four-way split screen of the Phantom of the Opera, Harold Lloyd hanging from a clock, Buster Keaton chashed by a train, and Charlie Chaplin eating his shoe. “Newsreel of the Stars, dateline: Hollywood, 1930,” the announcer proclaims. He informs us how the Warner Brothers Animation Studio created the siblings not knowing what they got themselves into. Yakko, Wakko and Dot caused havoc on the set and their films made no sense making the studio execs cringe. As a consequence, their films were locked away in the studio vault and the siblings were locked away in the studio water tower “never to be released.” They broke out of their confinement, and that’s the way the adventures begin.

Supporting characters include Pinky, a thin dim-witted lab mouse with an Australian accent, and Brain, the megalomaniacal evil genius whose plans to “take over the world” are foiled by Pinky’s blundering. Slappy Squirrel is grumpy and cheeky old former cartoon star “from the god old days” with hilarious one-liners. In “Woodstock Slappy” (Season 1, episode 281), Slappy and her nephew, Skippy, go to the country for some relaxation only to wake up and find that their tree is in the middle of the audience to Woodstock. They jump up on an amp and do a witty homage to Abbott and Costello’s “Who’s on First.” Slappy asks Skippy, “What’s the name of the group playing on stage?”

Slappy: “They name of the group on stage.”

Slappy: “So the name of the band is Yes?”

Skippy: “No, Yes isn’t even at this concert. Who is on stage.”

Slappy: “What are you asking me for?”

This continues for about another minute until Slappy is completely confused.

“Meatballs or Consequences” (Season 1, episode 19) is a bizarre and comical parody of Igmar Bergman’s films. Wakko enters meatball eating contest in Sweden. When he eats one too many, the Grim Reaper appears and tells Wakko, in a Swedish accent, that he is “living impaired” and places a “kuputt” sticker on his forehead. Yakko and Dot protest and insist that they can not be parted because “we’re like civil war chess pieces from the Franklin Mint.” The Reaper agrees to play a game of checkers with Yakko and Dot with Wakko as the prize. In a monotone voice Yakko says, “All is strange and vague.” Dot responds, “Are we dead?” “Or is this Ohio?” Yakko cuts in. The Reaper pops “kaputt” stickers on Yakko and Dot with plans to take them to the netherworld. He soon changes his mind when they harass and annoy him. The Reaper releases them and retorts, “I proclaim you alive…until I return. Which won’t be for a very long time,” and runs away. Brilliant!

“King Yakko” (Season 1, episode 10) is an uproarious homage to the Marx Brother’s “Duck Soup.” Yakko inherits the throne to Anvilania and endures the boring national anthem sung by the wonderfully named Perry Coma. He starts an argument with the neighbouring country’s leader by mocking his costume. He replies, “This is the uniform of a great man!” In true Marx Brothers fashion, Yakko says “Does he know you’re wearing it?” The siblings break into song with a few bars of “So It’s War” and the mayhem begins. The Marx Brothers live on in cartoon form in this episode and thus are exposed to a younger generation.

“Animaniacs” is clever, sharp, and insanely humourous. The educational episodes, such songs as “Yakko Universe” (Season 1, episode 50) and “US Presidents,” along with various references to Einstein, Beethoven, and The Beatles, et al, makes this show enlightening, wildly silly and imaginative. Long live “Animaniacs!”
~~~~~~~~~~~~~~~~~~~~~~~~~~~~~~~~~~~~~~~~~~~~~~~~~~~~~~~~~~~~~~~~~~~~~~~~
STRANGE INTERLUDE: My Dream, Time-Travel inspired band, "Hypnagogic Telegram" is going VIRAL on Youtube. Timelord Rock. Trock. I play a timeghost (zeitgeist) that inhabits the wardrobe closet in the TARDIS. I come out in costumes from various eras to dance & sing. If Doctor Who would have a band, it might sound like this.