“Never Forget to Stop and Smell the Flowers”  by Chicago Surrealist Group member, and Lithuanian performance artist, DainaSurrealism
Although categorized as a children’s book, Momo (also known as The Gray Gentlemen or The Men in Gray), may appeal to a wide spectrum of adults with its thought-provoking social criticism . Michael Ende (1929 – 1995) published Momo in German in 1973 (translated into English in 1985). Ende is best known for his book Neverending Story (German version, Die Unendliche Geschichte, 1979: English translation, 1983). 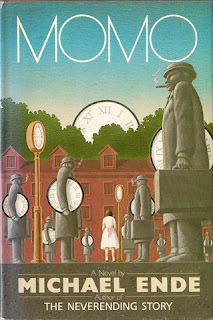 (Con't) Ende’s writing style was influenced by his father, the famous surrealist painter, Edgar Ende. The surrealist ideals of rebellion against conformity and fighting society’s numbing of the spirit of imagination is evident throughout his work, but nowhere more so than in Momo. The main characters in Ende’s books are misfits who resolve to be themselves despite external pressures. The protagonist, a young girl called Momo, is the epitome of non-conformity: she wears old clothes, has raggedy, unkempt hair, and lives in a small room under the ruins of an ancient amphitheater; she is a run-away from an orphanage and refuses to wear shoes. Since the amphitheater is on the outskirts of an unnamed city, the story could take place anywhere in southern and anytime, giving it a fairytale quality.
~~~~~~~~~~~~~~~~~~~~~~~~~~~~~~~~~~~~~~~~~~~~~~~~~~~~~~~~~~~~~~~~~~~~~~~
Strange Interlude: MOMO NEWS: HYPNAGOGIC TELEGRAM (my cabaret band) in rehearsal with our MOMO song "Walking Backwards Thru Time" (below).
GOING VIRAL w/ Chaplin dance. (below)
The CHAPLIN DANCE has backdrop of George Melies 1902 film Trip to the Moon (as seen in Hugo film), Zazie song "Dans la Lune."

Lewis Carroll, Dr Who, Dream, & Fortean inpired tunes. Multi-lingual. Silent film inspired dances. Trock. Lietuvaite soka kaip Chaplin.
~~~~~~~~~~~~~~~~~~~~~~~~~~~~~~~~~~~~~~~~~~~~~~~~~~~~~~~~~~~~~~~~~~~~~
Momo and her friends lead a leisurely existence until the appearance of the ghostly Men in Gray, who coerce the populace into “saving their time” in the “Timesaving Bank,”  then disappear without a trace, leaving the individuals unaware of their existence and convinced that timesaving was their own idea. Soon Momo’s friends grow irritable, rush about compulsively saying, “I have no time,”  and obsess over money, in the process sacrificing their joie de vivre (joy of living). In this book, Ende illustrates the importance of a life of quality over a life of quantity.
Billboards appear declaring,
“THE FUTURE BELONGS TO TIMESAVERS”
“MAKE MORE OF YOUR LIFE, SAVE TIME” The book takes a radical turn when Momo organizes a demonstration of children neglected by their “time-saving” parents (quite revolutionary for a “children’s book” to teach kids how to organize a protest, no wonder this book isn’t widely available in !). The Barbie-like dolls and expensive toys which the Grays try to bribe the children with reveal the distracting and superficial nature of materialism. A tortoise named Cassiopeia helps Momo escape the Grays by traveling to a mysterious part of town where time runs backwards in order to meet the Professor Secundus Minutus Hora, who helps fight the Grays.
Ende impressively constructs rich symbolism in his characters: Momo’s extraordinary skills at being a good listener represent the importance of introspection and connecting with others; Guido, the local story-teller, who spins engrossing tales inspired by his muse (Momo), encapsulates the power of imagination; the Grays, who all look identical  (with gray skin, gray suits and such unemotional voices that they even  “sound gray” ), symbolize the stifling conformity and manipulative nature of capitalism; Cassiopeia, named after a bold human queen who dared to challenge the Gods in Greek mythology, embodies independence and defiance; Professor Hora, residing in Never House and wearing omni-vision glasses, personifies the inexplicable vagueness of time.

Fan art (left) and Ende's illustration for German cover (right)
Ende has Nowhere House swimming in surrealism. Cassiopeia, who can see thirty minutes into the future, slowly leads Momo in order to quickly escape the Grays, while the Grays dash about only to find that they are standing still. This is a brilliantly creative re-working of the scene from Through the Looking-Glass in which Alice and the Red Queen run as fast as they can just to stay in place. When Momo asks Professor Hora what the Grays are, he replies, “Strictly speaking, they’re nothing. They exist only because people give them the opportunity to do so.”

Ende’s skill as a social commentator is akin to Rod Serling’s in Twilight Zone since Ende skillfully uses fantasy and the bizarre as a means of thinly-veiled social criticism. Ende’s illustrations for Momo show inanimate objects and the back of Cassiopeia, purposely leaving the characters up to the imagination. Momo is a classic which reads swiftly despite its provocative insightfulness. Ende was a visionary; recognizing forty years ago which direction society was taking with consumerism and hidden interest groups, thus making Momo ring truer than ever in our modern society. 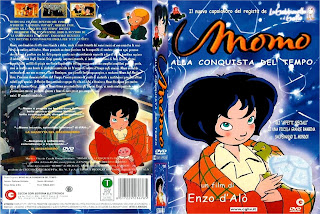 film  (top)                                                 cartoon (below)
In the 1980s, big budget movie versions of Neverending Story (dir. by Wolfgang Petersen, 1984) and Momo (dir. Johannes Schaaf, 1986, John Huston playing Professor Hora) were produced in . Perhaps not surprisingly, Europeans generally respond more favorably to social criticism and political activism than Americans, thus making Ende’s books well-known through-out while obscure in the States. Although the films lack the depth and details of the books, they are worth viewing for their creativity and visual lavishness.


STRANGE INTERLUDE: My Dream, Time-Travel inspired band, "Hypnagogic Telegram" is going VIRAL on Youtube. Timelord Rock. Trock. I play a timeghost (zeitgeist) that inhabits the wardrobe closet in the TARDIS. I come out in costumes from various eras to dance & sing. If Doctor Who would have a band, it might sound like this.

Posted by SexlogistD at 9:58 AM