I've been a lucid dreamer since childhood. My Russian step-grandfather got me into the habit of recalling my dreams for him in the morning. I started this Illuminated Dream Manuscript years ago. It was just an elaborate sketchbook; that is, until Penelope and Franklin Rosemont, the founding members of the Chicago Surrealist Group took a look at it. Imagine my astonishment when they asked if I would want to publish it! Inspired by Medieval Illuminated Manuscripts which pre-dated Guttenberg's printed Bibles, this work is meditative in its undertaking. I received a lovely fountain pen as a Christmas present. That, in turn, inspired me to experiment with a wide spectrum of calligraphic styles. I decided to use Gothic Blackletter calligraphy (12th c. forward) throughout much of the book. 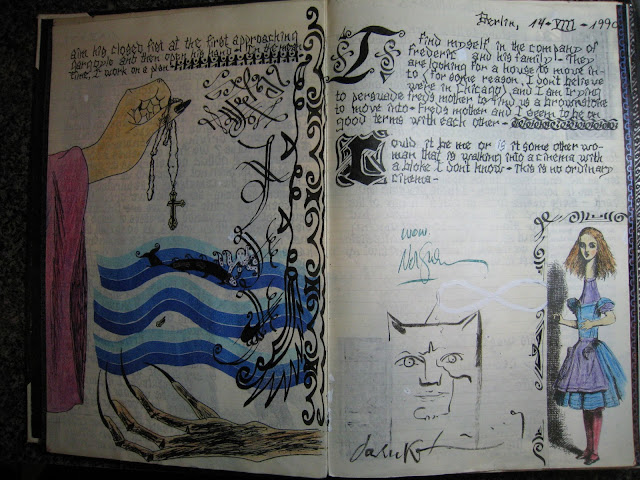 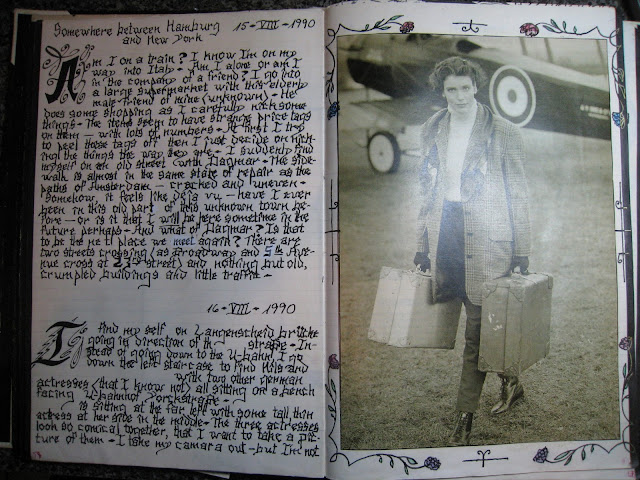 The above was a dream I had on a transatlantic flight from Hamburg to New York.
I have thousands of dreams recorded; first in scribble form on paper, then on mini tapes, now in digital formats.

I started this project 20 years ago. It wasn't until two years ago that I heard of Carl Jung's Red Book (aka Liber Novis, Latin for New Book), which wasn't published till 2009. Carl Jung (1875 - 1961) was a Swiss psychiatrist who was closely associated with Sigmund Freud until they disagreed and parted ways in 19 Historian Sonu Shamdasani convinced one of Carl Jung's heirs to allow him to publish the work. The Red Book is an extraordinarily illustrated volume containing his dreams and visions which he experienced starting in 1913. It contains 205 pages of his experiments with calligraphy, letterheads, and singular artwork. His book is the only other example I know of which combines illustrations, dreams, and visions with attention tremendous attention to detail in a hand written work.

Posted by SexlogistD at 9:09 PM