Inspired by a dream in which I walked through doorways draped in velvet curtains. A few of the characters are inspired by the animated Disney "Alice in Wonderland" from 1951, in which classic vaudeville & Ziegfeld Follies comedian, Ed Wynn, starred as the Mad Hatter. He also played Uncle Albert in "Mary Poppins," starred 2x in" Twilight Zone", and was offered the title role in "The Wizard of Oz"...he turned it down).

Inspired by twisted logic within "Alice in Wonderland"

~~What do you think happens to an egg after it eats itself? Please give me your interpretation in the comments section.

The calligraphy is in ancient Greek with English translations. This is inspired by the book "If Not, Winter: Sappho's Fragments."
She was one of the first lyric poets of antiquity. Sappho lived in ancient Greece c 630 - 570 BCE.

Inspired by 1920s flappers and the interest in seances to summon Houdini's spirit after his death in 1926. Houdini and his wife, Bess, had an agreement that the first to die would contact the survivor via code. After many unsuccessful seances, Bess held the "Final Houdini Seance" in the Knickerbocker Hotel in Hollywood, CA in 1936. It was recorded onto vinyl with her sadly concluding "I now, reverently, turn out the light." 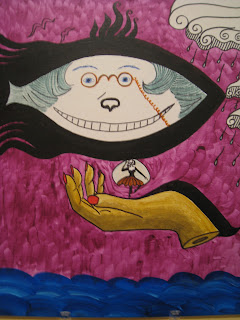 ~~Inspired by my love of Mannerism, an obscure short-lived twisted art-form from the Italian High-Renaissance (1520 -1580).  Exaggerated human figures were part of the Mannerist style. It was eventually suppressed by the Catholic Church as a form a heresy. 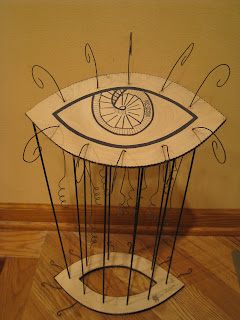 "L'esprit d'escalier" aka "Logic of the Stairs" Wood, wire and markers, 2008  ~~Inspired by the term, l'esprit d'escalier" which refers to the instant you think of the right comeback, yet it's too late (as you're on the stairs leaving).   Eye inspired by staircase in the Gustave Moreau Museum in Paris. http://www.whattoseeinparis.com/gustave-moreau-museum/ 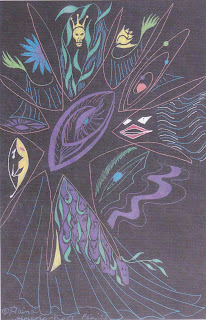 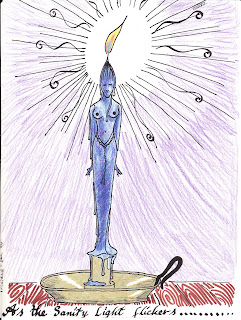