Ground-breaking Cult Television Shows of the 1960s (The Prisoner, The Avengers, Ernie Kovacs)

The 1960s was a time of questioning the status quo and exploring new forms of creative expression. Three shows from this era stand out for their innovative visual effects, controversial main characters, and absurdist plots; “The Prisoner,” “The Avengers,’ and “The Ernie Kovacs Show.” They continue to influence film and television to this day. 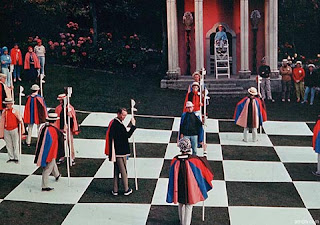 The legendary BBC mini-series, “The Prisoner” (1967) stars Patrick McGoohan (1928 – 2009) as Number Six, a kidnapped ex-spy who is relocated to a beautiful yet mysterious village where the inhabitants are known not by their names, but by their assigned numbers. McGoohan (King Edward I in “Braveheart” 1995) was the brilliantly creative mind behind the show; having written, produced, and directed it.

The intro to the show sets the stage superbly, thus making each of the seventeen episodes non-linear. To the sound of thunder, Number Six storms into his Bose’s office with a letter of resignation. A menacingly large black car follows him home, looking as if it will eat his small Lotus sports car with him in it. He hurriedly packs his suitcase, only to be gassed through a keyhole. Disoriented, he wakes up and stumbles to a window to find he is in an apartment in the Village.

What is the reason why Number 6 resigned in such a fury? What is the nature of the information which Number 2 is obsessed with obtaining? Where is this Village? The answer is: there is no answer. That is the exquisiteness of the show; it is purposefully left open to the interpretation of its viewers. This is no mindless sit-com with canned laughter tracks signaling viewers where to giggle; it is a thinking persons program full of symbolism, social criticism, and double entendres.

McGoohan’s vision of a Kafkaesque society where untold numbers of people are blackmailed to report on the activity of others is hauntingly familiar to that of the Stasi (Secret Police) apparatus in East Germany which indoctrinated one quarter of the population to spy on their friends, family, and neighbours. The show is timeless and produces striking images which permanently etch themselves into the minds of viewers.

Like putting together a 200 piece puzzle of M.C. Escher’s staircase, the plot unfolds to reveal its splendid complexity. The colourful clothing of the townspeople is in stark contrast to their drab personalities and strict adherence to rules of conformity enforced by the establishment. Upon deeper inspection, the wardrobe, towels, and umbrellas of the townsfolk are in primary colours; blue, red, green, yellow, the same shades recur with no variation. Number Six has a distinctly different outfit: gray pants, dark blue turtleneck, and black dress jacket with white trim. Nobody looks like him, and nobody dares act like him. He is the embodiment of non-conformity: he questions the rules of the authorities, and tries to escape every chance he gets.

The location of the exterior shots is a visual odyssey in its own right. The village is cluster of breath-taking classically inspired buildings surrounded on three sides by mountains and a beach by the sea on the forth. The location was carefully kept secret during production, finally revealed in the closing credits of the last episode, “Fall Out.” Portmeirion, a small resort town in North Wales, has an enchanting quality about it. A vanity project by Welsh architect, Sir Clough Williams-Ellis, it was deigned and constructed between 1925 and 1975 in the style of a southern Italian town. Lovely sunny days, lush gardens, and palm trees make this town idyllic, but it is a gilded cage for Number 6.

The art Director, Jack Shampan, created the atmospheric Bond-like feel to the mechanical devices and interiors of Number Two’s chamber and dome control room. Rover is huge remote control white bouncing balloon which incapacities insubordinates and escapes. When it moves through the village, people become motionless; a surreal sight.

“The Prisoner” is experimental in theme, characters, and setting. Like the work of Lewis Carroll, it combines symbolism, strange characters, and unusual scenarios to weave together a story which represents different things for different people. McGoohan was offered the role of Bond before Roger Moore, but he reclined. He chose instead to take the spy genre to heretofore unexplored psychological and sociological territory and for that we are grateful.

“The Avengers” is an outstanding BBC spy-fi (spy fiction with elements of science fiction) adventure series starring Patrick Macnee (1922 – present) as the impeccably stylish secret agent John Steed, and Dame Diana Rigg (1938 – present) as the fearless and independent-minded Emma Peel. The show ran from 1961 – 1969 and was filmed in black and white until 1967, when colour was introduced to marvelous effect. Rigg played Peel from 1965 – 1968, after Honor Blackman, who played Catherine Gale, left the show.

Peel is the epitome of femininity; intelligent, elegant, and beautiful, all while fighting off enemy spies so she can complete a friendly game of chess with Steed. Her classic Lotus Elan sports car and leather cat suits embody the ideal of an emancipated modern woman. How I would love to have that car in my garage and those clothes in my closet. Forget diamonds, I want those girls toys!

“The Avengers” has classic wit and charisma which makes it addictive. The chemistry between Steed and Peel clicks perfectly.

The Absurdist World of Ernie Kovacs

Ernie Kovacs was a clever pioneer of camera techniques in the toddler days of television. He was the first to use a tilting set, produced the first sketch comedy show on television, and he broke down the forth wall when he filmed skits inside the studio control room, amongst other innovations. He also hosted the first nationally syndicated morning show called, “Three to Get Ready.” The networks didn’t think it would last because they thought that no one would watch TV so early.

Kovacs was a spontaneous comedian with a charmingly twisted sense of humour. He is best remembered for his “Nairobi Trio” in which three actors in monkey suits move like wind-up toys to the tune of Robert Maxwell’s “Solfeggio.” They take turns hitting each other and making goofy faces. He created many memorable characters such as Percy Dovetonsils, a boozy and flamboyant gay poet. Yes, the first gay character on network TV and this was in the late 50s/early 60s!

Dovetonsils reads poems to the audience as he drinks his martini. One skit had him reciting a poem he wrote to the bookworm living in his library, entitled,

Ode to a Bookworm

“Oh hail to thee thou streamlined fellow, / You go through my books like /

A fork goes through Jell-O. /When I open a book and / Look back at the binding, /


After a few more stanzas it concludes…

“Today is your birthday, may you live good and long, / So the night will be filled with your nibbling song. / Now you can eat my presents from the back to the front /

For today I've enrolled you in the "Book of the Month.”


Kovacs used his fingers and found objects around the set to create a trippy black & white kaleidoscope set to classical music. An early Microsoft Media Player. He was psychedelic before the rest of us know the word. Sadly, Kovacs died in a car accident in January 1962. He was only 42. He would have loved the 60s with the coming of colour television, lava lamps, and new directions in filmmaking. To imagine him in the 60s is to see an artist experimenting in his element. Perhaps there is a parallel universe out there where he made it home safe that rainy night in Los Angeles. That universe would watch the various hilarious incarnations of “The Ernie Kovacs Show” throughout the 60s. One day, in that otherworld, he would explode onto the screen in astounding colour. As for us here, we can just mourn the loss of a creative master who vanished before he reached his full potential.

“The Prisoner,” “The Avengers,” and “The Ernie Kovacs Show” had a profound impact on television in a myriad of ways. Each show had unique characters which weren’t depicted on television before.

“The Avengers” gave us the emancipated Emma Peel. That opened the floodgates for independent and courageous female characters to follow. She is the Amelia Earhardt of television. Peel pioneered the role of strong female characters. In the mid-sixties, it was unprecedented to have a woman who could fight (and win) her own battles. Female roles were weak and mousy; they often were victims who would get kidnapped by just grabbing their wrists and walking away. We didn’t get another tough and robust female role like that until 1977 with Princess Leia from “Star Wars.” After Leia, it took at least another decade for resilient females to become visible. The proliferation of these women, such as Trinity from “The Matrix” (1999), can be traced back to the immaculate Emma Peel.

“The Prisoner” presented a rebellious individual who single-mindedly fights the system which oppresses him. This isn’t James Dean without a cause. Number Six is dehumanized and stripped of his identity. This makes revolutionary television, literally.

Ernie Kovacs revealed the first flaming gay character. Dovetonsils inspired later characters such as the “Men on Film” skit from “In Living Color.” Shadows of Kovacs are seen in “Saturday Night Live” with “Daily Affirmations with Steward Smally.” Kovacs’theater of the absurd humour and visual pranks wiggled their way into the drag acts and nonsensical news segments in “Monty Python’s Flying Circus.” Kovac’s skit “Hungarian Chef” has been reworked by Jim Henson in “The Muppets” with “The Swedish Chef,” minus the alcoholism.

As constant sources of inspiration, these classics never grow old.

Email ThisBlogThis!Share to TwitterShare to FacebookShare to Pinterest
Labels: Ernie Kovacs, The Avengers, The Prisoner