Based on the Russian children’s book Cheburashka (1965) by Eduard Uspensky, this series of four stop-motion animated shorts features Cheburashka, a cheerful bear-like creature, and his best friend, Gena, a crocodile who works at the Zoo but lives in the city. Cheburashka is almost Chaplinesque in how he combines charm and melancholy when he tries to find his place where nobody knows what he is or where he came from (even the scientists at the Zoo reject him because they don’t know what species he is!). The animation style is charming and sentimental, without the stereotypical characters and sappiness so often found in Disney animation. The characters are unique and full of personality. Gena plays solitaire chess and puts up fliers throughout the city looking for friends; Shapoclyak, an old lady who has a rat living in her purse, goes breaking windows, stealing things, and causing general chaos.

Much of the incidental music is played on violins, acoustic guitars, and/or accordions, giving it an almost chanson feel. Two of the episodes feature catchy songs with endearing, sentimental lyrics. Episode 2, called Cheburashka, opens on a rainy day with Gena playing accordion and singing "The Birthday Song".
“It’s unclear to the passersby,
On this rainy day,
Why I’m so happy…It’s a shame that a birthday comes just once a year”
Shapoclyak (episode3) closes with Cheburashka, Shapoclyak, and Gena sitting on the caboose of a blue train. As they roll away, Gena plays the accordion and sings "Blue Wagon".
“Slowly the minutes are floating away
Don’t expect to meet them anymore
Even if giving up the past is a bit sad
It’s still best to go ahead…
To all new adventures we are rushing, my friends,
Hey, train driver, give some more speed!
Why, oh, why is this day ending?
Let it last the whole year!”

These songs are tremendously popular in all of the former Soviet republics. Adults sing these Cheburashka songs at parties; children sing them as they play. Russia has a long tradition of fairy-tales (skaski) being a major part of its cultural identity, much the same way that bande dessinée (comic books) are part of French and Belgian culture, with adults being equally fans of the genre as children. The line between fairy-tales and cartoons (multiki) is blurred in Russian culture with Cheburashka being the most famous and beloved of all Russian cartoon characters. He has become a cultural icon. Cheburashka is the official mascot of the Russian Olympic team, seen as the stuffed toy waved around by all their athletes at the opening and closing ceremonies since the Summer Olympics in Greece in 2004. He has become popular in Japan and among anime fans internationally. TV Tokyo has announced that it is producing an anime series of Cheburashka, as well as producing a full length feature.
Cheburashka was produced by Soyuzmultfilm (Union Animation in English), Russia’s premier animation company based in Moscow, which was founded in 1936 and has produced over 1500 animated shorts and films in that time. Soyuzmultfilm stands out as both a highly productive and experimental company. Their productions span a wide spectrum of styles; from vibrant films with dancing and singing, to sparsely atmospheric films with odd sound effects, to cut-out animations of 14th - 16th century icons and frescos, to  dark animation reminiscent of Jan Svankmayer’s surrealist shorts. Themes include such diverse subjects as history, fairy-tales, science fiction, existentialism, the cost of war, and feelings of social isolation amongst others.
The English subtitles on this DVD are well translated, although the subtitles on the last episode (Cheburashka goes to School) are a bit out-of-sync (running about 2 sentences behind the actual dialogue), but since the action isn’t so fast, it is still easy to follow. Cheburashka is a treasure from Soviet-era Russia. Hauntingly beautiful music and melancholy lyrics combine with amiable characters for an incomparably unique stop-motion experience for all ages.

As an added treat, we get Vasili Livanov voicing Krokodil Gena. He has a velvety rich voice which is familiar to Russian fans of a series of "Sherlock Holmes"films. He played Sherlock so splendidly, that he was awarded an honourary Member of the British Empire  for his "service to the theatre and the performing arts." A sculpture of Livanov and Vitaly Solomin (who played John Watson) in their now-famous roles, finds its home alongside the Embassy of the United Kingdom in Moscow. He is a brilliant actor, and his distinctive and melodic voice is worth hearing even if you don't speak/understand Russian. Benedict Cumberbatch and Vasili Livanov share a) the fact that they both played distinctively different and unforgettable versions of Sherlock Holmes, and b0 they are both immaculately smooth voice actors. If language is music, than their voices are harmonious melodies. 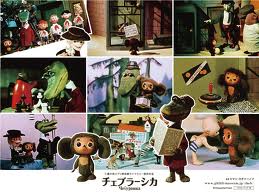 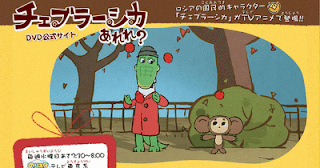 Posted by SexlogistD at 8:21 PM